To baste something means to temporarily attach two pieces of fabric in place so that they will hold their position until a more permanent stitch seals them in place.

Pin-Basting
The most common form of basting is pin-basting, which is such an integral part of sewing that patterns take for granted the fact that you need to pin-baste everything. Pin-basting simply means lining up your fabric, and then using pins to secure the fabric in place for later sewing. Anytime you are going to stitch a seam together, you are expected to pin-baste first.

There are two important parts of pin basting: 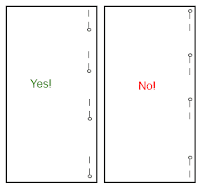 Baste Stitch
At times a pattern will specifically tell you to baste two or more pieces together using a baste stitch. The elements of thread-basting, again, is that you should be able to remove the seam easily. Sometimes baste stitches remain in permanently, but a baste stitch should always be able to be pulled out without a lot of effort (or even a seam-ripper).

Hand-basting is just, as my mom put it, a "long, lazy stitch" with a hand-needle. You don't have to knot your thread at the end, and you just do about a half-inch "up and down" stitch joining the two+ pieces of fabric together in a straight line. Hand-basting isn't used very often, but it's really quite simple. Remember, the point is to keep the fabric "in place" so you don't want your stitches too far apart or it will just separate and slide around. This is why, unless the pattern specifically says to hand-baste, you're going to want to:

Machine-baste
Some machines will have a special "baste-stitch" setting on them, but a baste-stitch is not hard to put together on a machine without that specific setting:

Removing a baste stitch
The purpose of the baste stitch is that it should be easy to remove, without using your seam ripper or snips. Simply grab one of the threads at the end, pinch the other end of the fabric, and pull the thread out. You might experience some bunching of the fabric, this is normal, just smooth out the fabric by pulling it away from the end you're pulling the thread out of, and you'll gradually work the stitch out. You may find with a machine baste, that you need to snip a stitch or two to "get things going" but otherwise, it should be pretty simple to remove.
Posted by RS at 8:54 AM