(If you're new to cutting out patterns, see this post before you tackle what I write below!)

I'm working on making a favorite shirt of mine (Butterick 5390, hopefully more of a post to come...) and thanks to the shirt size and the fabric size, this was the cutting layout I was expected to use for the body of the shirt:

As you can see, this is a partial fold layout (there is a single fold line but the selvages are not even), but with a lot of weird stuff going on.

The * next to pieces 5, 6, and 8 have the following footnote: "Cut piece only once. Cut other pieces first, allowing enough fabric to cut this piece. Open fabric, cut piece on a single layer."

So that's sort of minimally helpful. Here's how I got these pieces cut out.

1. Carefully cut out the pattern pieces along the size lines that you will be making and cut into any notches.
Normally, for a new pattern, I always say to just cut each piece out "generally," but we need pieces 4, 6, and 8 to be cut out precisely ahead of time. As usual, watch where collar and shoulders might cross cutlines.

2. Look for the pieces that are cut out entirely on the folded piece and knock those out first. 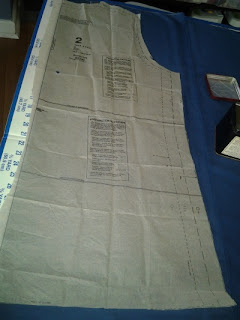 This is just piece 2--that's the only one that fits in its entirety on the fold. So the first thing I did was manage the partial fold so that piece 2 just barely fit between the fold and the selvage area, and I moved the collar (left edge) of the piece as close to the raw edge as humanly possible--because we can't lay out everything before we start cutting, it's important that piece 2 not taking up an inch more material than it needs to. Cut out piece 2 and put it aside.

Piece 5 could technically be perfectly symmetrical--there was a dot at the top of the curve that could be lined up to the fold, but you have to be dead-even with matching your grainline to the fold. Similarly, piece 5, being a sleeve, will have assymetrical notches so if you decide to do this, don't cut out the notches until you have the piece cut out and you can unfold the fabric to lay flush against the pattern piece and cut out the notches then. Otherwise, you will want to cut out Piece 5 with the rest of the pieces (this is what did).

Unfold your fabric and smooth it out as best you can.

3. Sketch the crime scene
I started with pieces 4 and 8, the facing pieces. I would start with the "lower" part of piece 8 (pattern piece face down), and line that up against the raw edge and the underarm corner of where you cut out piece 2. Then, with your ruler and some white tailor's chalk, mark where that fold edge is on the piece. From your selvage (the selvage on the side that's on the top of the diagram, since cutting out piece 2 messed up our selvage from the other side), measure that amount and create a short mark along the grainline with your tailor's wax. This will be your "center fold" for this piece. Lay piece 8 back down and match that center fold to your line and make sure it fits and doesn't run off the fabric or into the cutout you did for piece 2. If there's too much room between piece 8 and the cutout for piece 2, you might not have enough room to cutout pieces 4 and 5, so try to close that distance. Pin it into place.

Then, with your tailor's wax, go ahead and trace, crime-scene-style, piece 8's outline. Mark your dots and notches.

When you're done, unpin piece 8 and flip it over along that centerfold line, so the pattern piece is now face up, and the center fold line still matches against the wax grainline, but also that the corners of the center fold line match up to the wax outline. Pin it into place again.

Put down piece 4 in the same way. Keep the ends as close to the raw edge as you can without it running off the side. Rather than hugging piece 8, piece 4 wants to start near the selvage and then work from there, but you'll do the same thing with measuring the grainline and tracing your "fold line," then creating the wax outline of the piece before flipping it over, lining it up, and pinning into place. 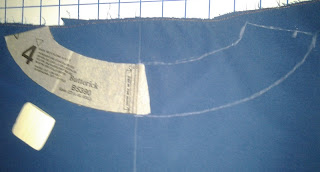 Piece 6 happens much the same way -- obviously, you'll need to draw a much longer grainline to match it's fold edge along, but it's just a larger version of pieces 4 and 8. While you're positioning piece 6, it's not a bad idea to have the piece 5 (the one on the upper half) down on the fabric just to make sure you have enough room for it. You don't have to pin it properly into place until later, you just need it to "guard its territory" while you wrangle piece 6.  When you're done, if you didn't cut out the other piece 5 in step 1, go ahead and put piece 5 under piece 6 just to verify that you've got enough room.

4. Cut out your fold pieces
The pieces that you've had to trace can be cut out now. Take it easy, and remember to cut more on the inside of the traced line than on the outside (since that's more where the pattern piece ended) and then around the pattern piece as normal. Don't cut across your grainline marks -- that's your "fold line!" Each piece will cut out as a single piece that should be perfectly symmetrical.

5. Finalize and cut out remaining pieces
At this point, all that's left is to cut out piece 5 at least once (twice if you didn't cut it out in step 1). Remember that you always measure a grainline off a selvage, don't measure off of a cut edge!
Posted by RS at 8:20 AM