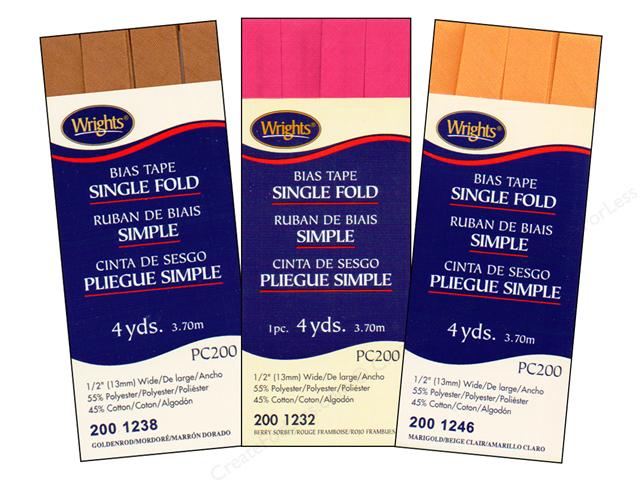 In our first project we did some work with single-fold bias tape, but here's a separate article on it just for ease-of-reference. Bias tape is a simple way of finishing a raw edge that does not require a seam or a hem, and does not need structural reinforcing through facing. Armholes on a sleevless shirt are a good example of when to use single-fold bias tape.

Bias tape is, simply put, a thin tape made out of fabric that has been cut on a bias (45° from the selvage). It is then folded and pressed in a gatefold with the "wrong side in." You can make this yourself if you have enough extra fabric from your project (post on its way), or you can purchase bias tape from the notions section of your local fabric store (Note, there are many different varieties of bias tape: for most beginning garment projects, you want ½" wide single fold bias tape -- check your notions on the pattern). Try to get bias tape that matches your fabric's design or color as closely as possible.

You're going to see "stock instructions" every time your finish an edge with single-fold bias tape because it follows the same basic 3 steps, so here's what they mean:

The first instruction is to usually open up one of the sides of the tape. Even though it's named "single fold" bias tape, bias tape does in fact have two folds on it. It doesn't matter which side you unfold, but this side becomes the "crease" (the crease of the opened fold), while the remaining folded in side becomes the "fold."

Obviously, the tape is going to be a long, rather unruly strip to work with. So don't worry about unfolding the entirety, just get a couple of inches open and then continue to unfold ahead as you work. Similarly, you might be tempted to pre-measure the amount of tape you'll need and then cut so you don't have the whole spool to wrangle with -- I would highly recommend against this as, if you mis-measure, you will end up wasting a good deal of tape. Just be patient and don't try to do it all at once. 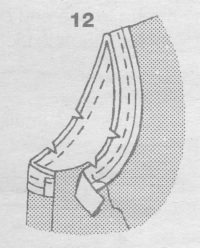 The next step contains a series of parts to it and it starts with pin-basting the bias tape to the outside of your garment's raw edge. We're going to want to lap our ends of the bias tape, so start at a seam and lay one end about an inch behind the seam as your work away from it. You'll place the RIGHT side of the bias tape (the flat side, not the side opposite the left side) against the RIGHT side of your raw edge (the outside of the garment), using your seam gauge and measuring so that the crease from unfolding on side in the previous step is ⅜" (1cm) from the raw edge and the fold is on the outside from the raw edge (double-check your pattern instructions to verify this allowance. Obviously, if the pattern says to use a difference allowance, use that!). Because the allowance from the crease to the edge of the bias tape is only ¼", this means that there will be some of your fabric peeking out from between the edge of the bias tape and the edge of the fabric. This is fine. Pin-baste the tape into place along the crease. If the bias tape folds in after you've pinned, that's ok, just flatten it back out as you stitch later on. Work your way around, carefully checking with your seam gauge to make sure that the crease stays ⅜" from the raw edge, until you return to where you started. At this point, you want to overlap the existing bias tape by about an inch, and then cut it. Now, with the overlap, you want to fold the the top piece under (it still want to overlap the flat piece) and then pin it into place.

Now, take it over to the sewing machine and do a simple straight stitch along your crease line (fix both ends).

Next, you want to trim the seam and clip any curves. I recommend shaving off the ⅛" allowance between the end of the edge of the bias tape and the raw edge. If you want to trim off the bias tape, I wouldn't recommend trimming off more than ⅛" of that, just to prevent yourself from nicking your seam.  For clipping the curve, you want to create a notch or two in the curved parts to help prevent bunching when you fold the tape over. Remember: Don't break your stitch! 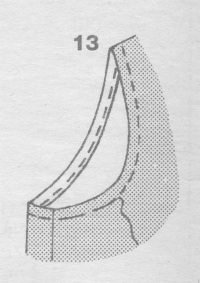 With your curves clipped, you're now going to flip the bias tape over to the inside along the seam you just created and pin-baste it into place. At this point, both folds will now be enclosed between the fabric and the bias tape, if the tape is single-sided, the "right side" will be all that shows, and the raw edge of your end will be neatly enclosed in the lap.

When you stitch, you'll want to stitch through the remaining fold so that it doesn't unfold and peek out. Remember, the bias tape is ½" wide, and the fold is about ¼" on the inside, so if you stitch ⅜" from the raw edge, you should neatly lock up the fold without slipping off of one side or the other. I generally do this as a top-stitch from the outside, but if you're still getting comfortable with precision-stitching, you might want to do it from the underside so you can keep better track of your allowance. Sometimes, the instructions will tell you to baste before you do the topstitch, I'm not overly-fond of topstitching over a baste-stitch (it creates ratty stray threads that are a pain to clean up), so I just use a pin-baste for this. If you aren't comfortable with pin-basting, do a hand-baste at the absolute edge of the inside of the bias tape, and then machine-stitch just inside the hand baste, then remove the hand-baste.