Email ThisBlogThis!Share to TwitterShare to FacebookShare to Pinterest
Labels: equipment

My work takes me back to Philadelphia (which I called home for several years) regularly if not frequently. At least every three months I head down, see my friends at the office, and check in with old friends that I made while I was living in the City of Brotherly Love. There are also a few shopping trips I try to make while I'm back in my old stomping ground, and with the exception of the occasional grocery from the Reading Terminal Market, I find that almost all of my "must haves" are on 4th street just south of South street. Of course, the House of Tea is on my to-do list, but for sheer "I'm going to get in a ton of trouble now" you can't beat Fabric Row.

Email ThisBlogThis!Share to TwitterShare to FacebookShare to Pinterest
Labels: fabric

For the first start-to-finish project, I'm going to make a simple, sleeveless tunic. This will use some of the stuff we've talked about, as well as one new technique: single-fold bias tape.

Most pattern companies offer some variety of this pattern in every season because it's such a staple of a woman's wardrobe. When you're looking at the pattern, check the notions -- you want one that only requires single-fold bias tape, and not one that requires interfacing (we'll do that on our next project!). If you want to follow along at home, the pattern I'm using is Simplicity 2262 which comes in both Misses (AA) and Plus (BB) sizes. We'll be doing View D, which is the sleeveless tunic. 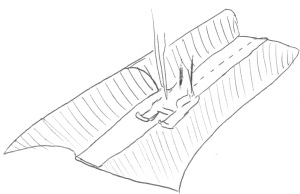 The Understitch is used to reinforce the form of a seam invisibly. It's similar to the topstitch with the exception that it does not go through the "top" layer of fabric on the outside of the garment. I find it is used most often when I am securing a collar's interfacing.

Unless otherwise indicated in a pattern, an understitch is a normal-length (2-3) straight stitch across the layers of fabric underneath the exterior (outward-facing layer) that is fixed at both ends. Like the Topstitch, you want to try to get the stitch as close to the original seam as possible, but because it is invisible, it is not as critically important that the stitch be straight.

Often, you will do an understitch after you trim the seam and clip the curves (trimming down the seam allowance on a bias and creating notches at the curve for ease--article on its way). If you iron your folded seam before you stitch, rolling the seam back just slightly so that it's along the inside edge of the underside of your garment, it will make the seam invisible to the outside, and then understitching will help keep that structure in place.

The Topstitch is a means of reinforcing a seam's structure by stitching through all the layers of fabric that make up the seam. Topstitching is used all the time to "neaten-up" a seam and create a more visible structural line, and it's also used when finishing bias tape along a sleeve or other opening.


Unless otherwise indicated in a pattern, a topstitch is a normal-length (2-3) straight stitch across all layers of fabric that is fixed at both ends. Because a topstitch will be visible on the final garment, it's important the stitch be as straight and even as possible, and is often as close to the seam edge as possible.

Having put in enough hours that she's decided I'm serious about all of this, Mom got me a ton of sewing tools for Christmas... 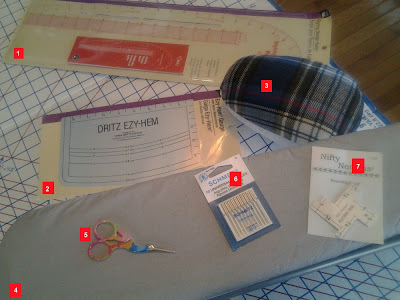 Email ThisBlogThis!Share to TwitterShare to FacebookShare to Pinterest
Labels: equipment

The easestitch is a stitch that is used to create a gather in your fabric in order to "ease" in two pieces of different sizes. Easestitching is most commonly used in fitted sleeves, where the shoulder of the sleeve is going to have more fabric than the shoulder of the body. Easestitching is also used when your piece will have a decorative gather or ruffle in it or when you want to gently shape the line of your garment. Patterns will usually indicate that you easestitch in between dots or notches.

The staystitch is a very simple stitch mostly used in collars to prevent the fabric from stretching or pulling while you sew.

Staystitching is a straight-line, regular-length stitch (usually around setting 2-3) that is through a single thickness of fabric and does not create any sort of seam or join.

The important thing about a staystitch is that you fix both ends and you follow the direction of the stitch indicated by the pattern. This may mean, if you have a single front collar piece, that you stitch in from the shoulder to the middle of the collar, then instead of going on to the other shoulder, you fix and stop, then start from the other shoulder and head in to the middle of the collar.