Putting in a set-in sleeve (version 1)

Fitted (set-in) sleeves aren't hard, but they can be a little fussy, and they definitely require patience and a careful hand when sewing in. And it's a great feeling when you turn the sleeve out and see a clean join without puckers or wrinkles.

Equipment
I highly recommend getting a tailor's ham before you start putting in fitted sleeves -- It's not too much money and it makes the part where you iron the seam flat much, much easier. For most sleeves a proper sleeve roll or sleeve board isn't necessary, but I have to admit I do like mine a lot. If you can only get one, definitely get the ham first and get the sleeve roll/board later because the ham will come in handy for many different sewing projects.

Cutting out
When you're cutting out a fitted sleeve, there will be a bell shape where the sleeve will join with the shoulder of the shirt. There will be notches on either side of this curve (and usually a few dots in between) -- one side will have a single notch and one side will have a double notch--these will correspond to single and double notches on the front and back armholes. When you're cutting out the pattern, you definitely want to pay attention to the cutting layout's instructions. If you're not able to fit the sleeve piece on a folded piece of fabric during the cutting layout and you have to cut the sleeve piece out twice, mind your p's and q's about the right/wrong side of both the fabric and the pattern piece, because those notches will tell you which side is the front and the back of the sleeve when you're trying to put it in, and it would be very easy to end up with "two left sleeves" so to speak if you have the notches in the same orientation for both sleeves.

So far I've run into two ways to put in a fitted sleeve. Version 1 appears to be the more common way. If you did the previous tunic project, you've done this already.  This involves stitching the front and back of the shirt together at the side-seams and shoulders, easestitching along the sleeve's shoulder, then stitching and hemming the sleeve arm, then fitting the sleeve into the armhole of the shirt with a slight gather and joining from there.

Since stitching the garment front-to-back at the side seams and shoulders happens well before you get into "sleeves," (and we've done that a ton of times before in our previous garments), I'll leave that out. Just make sure you press those side seams open! By the time you get to put the sleeves in, you'll have your shirt body done, with some raw-edge armholes. So at this point you will have your garment's body, and then two cut-out pieces of fabric marked as sleeves.

We're going to assume that there are at least three dots on the sleeve pieces: A large dot at the "top" of the bell curve, then two smaller dots somewhere between the large dot and either notch in the middle of the curve. The notches on the bell curve itself will also be assymetrical: One should be a single-notch and the other side should have a double-notch. These markings may differ slightly from pattern to pattern, but they're basically telling you the same things:


Note: If you're making children's garment or something petite-sized, you might need to reverse steps' 4 and 5, and it's possible you'll need to hand-stitch the sleeve into the shoulder if you can't fit the armhole around the arm of the sewing machine. 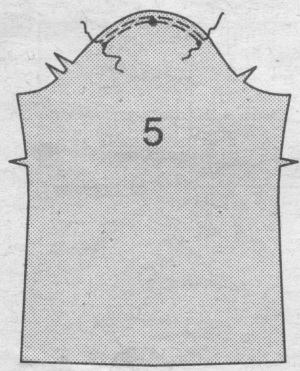 2) Easestitch as indicated between the small dots. As is my usual habit, I do not easestitch along the seamline, but rather just outside of it (closer to the raw edge). This way, my easestitch doesn't peek out from my seam in the final product. I would only increase the standard stitch length by 1 (e.g, if you normally use a stitch length of 2, switch it to a 3 for the easestitch). This ease stitch should not result in a visible gather, and we're going to need a very light touch with this one as we go forward.

Note: The pattern-indicated dots are probably not the same thing as the notches, check your pattern and instructions.

3) Stitch sleeve seam and press the seam open. This is fairly straight-forward. Fold the sleeve in half and match the notches. Then make a plain seam up this line, stopping when the scoop starts to come away.

When you press the seams open, you might end up creasing the sleeves a bit at either side if you don't have a sleeve roll or sleeve board and your sleeve is narrow, this is ok and won't hurt anything, but try not to have the crease go "all the way up" to where the armhole opening is as it might make it tricky to fit the sleeve into the opening properly later. 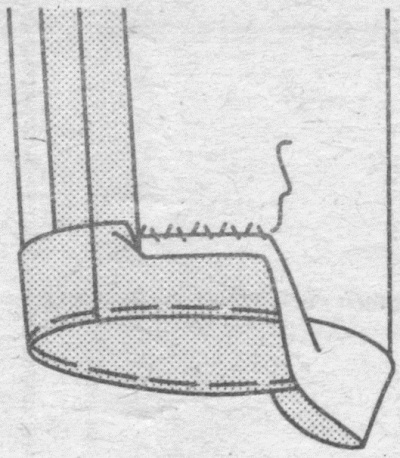 4) Hem as indicated. As I mentioned above, this might be something that has to happen before you stitch the arm together, if you've got a small enough wrist opening you might have trouble fitting it around the arm of your sewing machine, even with the tray off. Of course, if you have a small enough wrist, it isn't a bit deal to just hand-stitch that hem, either. If this is your first trip around the block with fitted sleeves, you might even want to wait and do this step last, once you've finished both sleeves, and make sure that they're even and one sleeve isn't shorter than the other!

(If you're doing a split-cuff sleeve, obviously, you can skip this step and just follow the pattern instructions for finishing the cuff edge.) 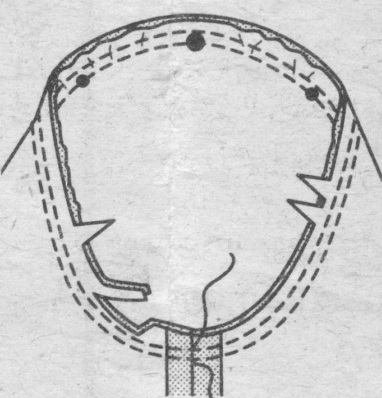 5) Turn garment inside-out and the sleeve right-side out. Feed the sleeve through the garment toward the armhole, so that the right sides are together on the inside. Match the underarm seams and then match the large dot at the top of the bell curve to the shoulder seam of the body of the shirt. Before continuing, make sure that the notches on the sleeve match up against the notches of the shirt: you want the single notch on the sleeve to match against a single notch on the shirt's armhole, and the double-notch to match likewise. If your single-notch is matching to a double-notch, it means this sleeve belongs in the other armhole.

6) Once you've confirmed that your sleeve on the right side of the shirt, start by pinning your underarm sleeves flush. Then pin your notches to their partner, and then pin the large dot at the top of the bell curve to the shoulder seam. Finally, pin the small dots to their partners on the shirt body. You'll notice that the sleeve does not lay flat between your small dots.

7) Use the easestitch that is closest to the the raw edge to gather the sleeve between the small dots so that the fabric can lay flat. This isn't tricky, but there are two things to remember here. First, you want to make sure that the gather is very evenly distributed and that you don't have bunches--those are going to translate to unsightly wrinkles and puckers in the final product. Second, you want to transition the gather to your seamline by using your interior easestitch: Gather half as much along this interior line as you did along the exterior line, and your ease stitch will even out at the seamline to a nice, clean line without any folds or puckers.

8) Put a lot of pins in, and pin against the seamline. I usually put in a pin about every ½-¾" at the easestitch, and every inch for the rest of the sleeve. I try to put them in on the outside, not the inside, but if it's easier to put them in on the inside, do that, and then when you've got it in the way you want, re-pin around the outside and take out the ones on the inside--don't forget you have to take this over....

9)  ....To the sewing machine! Take the tray off the arm of the machine so you can fit the sleeve around the base. Stitch the sleeve to the armhole, but take your time and don't rush. Sleeves are incredibly fussy to get into place--I find they really want to bunch under and pull away as you're working it around the arm, so take it slow, stop and check to make sure you've only got two layers at a time, don't fold under your existing seams, and keep your pins in until the absolute last minute!


Once you have the first seam in, make a second seam to reinforce about ¼" outside of the first seam (1/4" closer to the raw edge, use the ⅜"/10mm guide on your strike plate).

10) With both seams in place, trim down the seam. You do not need to clip the curves. With the seam trimmed, now you want to put in your finishing stitch. The good news is that because the seam will not need to be pressed open, you can finish those two layers together (just zig-zag or overlock through both layers). Stay on the raw-edge side of your seams.

11) Using your tailor's ham to ease the garment around the curve, and then press the seam toward the sleeve (away from the shirt body).

11) Do it all again for the other sleeve.

12) Bask in the glory of having lovely fitted sleeves on your garment!

Email ThisBlogThis!Share to TwitterShare to FacebookShare to Pinterest
Labels: assembly